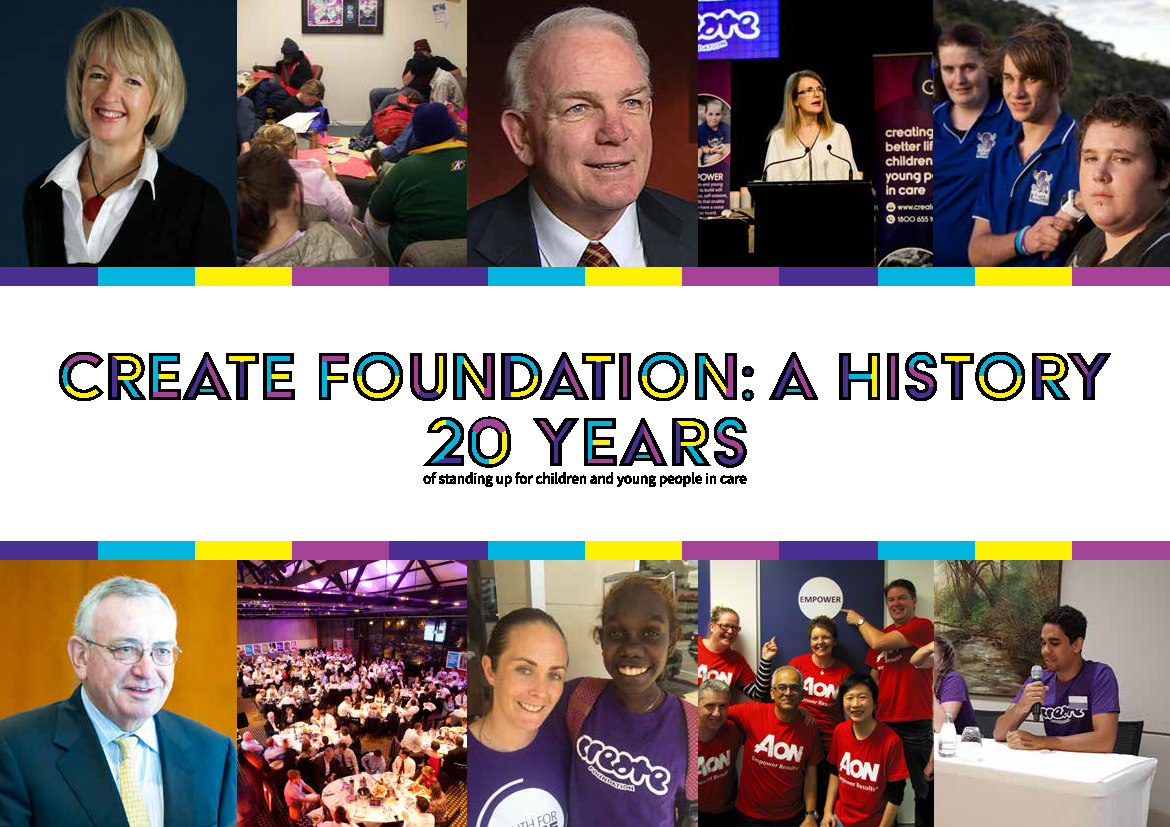 In 2019 we released this book celebrating our 20th anniversary ! Click the cover above to take a look!

CREATE’s very existence is a testament to the courage and resilience of children and young people in care across Australia. Our story recognises all those who have made us who we are today and celebrate the power and courage of children and young people with a care experience who have stood up and used their voice to CREATE a better care system. Jacqui Reed, CEO, CREATE Foundation

From its humble beginnings at garages and community halls across Australia, CREATE is now a national organisation with offices in each state and territory with almost 50 staff and over 23,000 children and young people with a care experience as clubCREATE members.

CREATE’s model of Connect to Empower to Change has stood the test of time in terms of its effectiveness in helping children and young people feel less alone in their care experience and assisting them to develop the confidence to use their voice to improve the care system.  We continue to play a vital role in the care sector today by ensuring the voices of children and young people are at the centre of decision and heard loud and clear.  Over 20 years, led by the courage and strength of our Young Consultants, CREATE has contributed to many significant improvements to the care system, including;

It was about making the opinions and thoughts of the young people who had actually been through care, the centre of the system. Through this we were able to create a lot of systematic change, but we also saw people be empowered by the fact that they had a voice. This was a long-time before the NDIS, a time where it was considered very radical that you would actually go to the consumer and ask them what needed to change or what they wanted. We would get ministers and service providers into a room of young people to work on designing the system from the ground up.Jan Owen AM, CREATE Founder
CREATE has opened up so many doors for me to advocate on behalf of young people to make their experience better. They gave me a safe environment when I did not know any. I have made lifelong friends. I will never forget what CREATE has done for me, CREATE is so important to ensure the next generation of kids have someone to speak up for them.Chris, CREATE Young Consultant

It’s been an amazing journey to get to this point but we can’t continue our work without your support. We need your to help elevate the voices of CYP in care by donating to our work today.

CREATE has changed the care system – in each state and territory there is a bill of rights for children and young people in care when often there is a charter of rights for no other group. Young people now own their care record. There is an Independent Commissioner for Children and Young People in in each state and territory and it’s a direct result of CREATE’s advocacy. CREATE has also gone on to influencing care services around the world and shaped their approaches.Mal Marcus, Former Member of Victorian Association of Young People in Care
The impact that CREATE has had on me is that it has made me a more confident, political and educated person – just a better person. My vision for the future of CREATE is that every child or young person in care is making decisions about their life and involved in decisions about their life.Nicola, CREATE Young Consultant

When I reflect on my time here at CREATE; as a young person and a worker – I’m so proud of the things we as a collective have done to help change the child protection system.Kelly Lotz, Former Young Consultant and Staff Member

I will never forget running the first conference in Australia for children in foster and state care, I remember walking into the room where there were hundreds of children with five of our group. They turned to me and asked me who all the children in the room were, I told them that they were other children in foster and state care. The group couldn’t believe it, they had all thought that they were the only ones, not realising that not only were these kids in foster or state care but so were 20,000 other children in Australia, I will never forget that sense of what it means to have that shared lived experience and the sense of empowerment that it gives. We really learnt that you can change people’s individual situations, there is a great power in doing so… but in the end, you have to change the system that propagates that result.Jan Owen AM, CREATE Founder

This year marks 21 years since the Australian Association of Children and Young People in Care (AAYPIC) became an independent incorporated organisation called the CREATE Foundation. AAYPIC itself was formed in 1993 by Jan Owen AM, who herself was adopted and then became a foster carer later in life.  Through her work with homeless youth in Brisbane, Jan had met young people with a care experience and found that many were as much victims of the state care system as they had been victims of their own families.  With these young people Jan formed and built AAYPIC  – with lots of the key early work happening at the garage of Jan’s place in Brisbane!  Read more about Jan’s life here.

AAYPIC was started because children and young people in care needed a voice in the decisions being made about their lives.  It was made up of a variety of state and territory groups focused on promoting the voices of children and young people and in 1995 launched a major campaign called ‘The Seven Point Plan to Protect Children and Young People in Care Now and in the Future’ – a call to action by young people for uniform child welfare legislation, national standards of care, accreditation of service providers and the appointment of a Federal Children’s Commissioner.

In 1997, Andrew O’Brien, the then AAYPIC State Coordinator for New South Wales, clearly articulated the issues that needed to be tackled in achieving consumer participation by children and young people in care. He noted that just having a voice was different from the two way process of real participation, and identified three steps that AAYPIC adopted to encourage involvement by young people: (a) ‘(creating) regular opportunities for children and young people to come together to identify, discuss and resolve issues of concern to them and the service provider’; (b) ‘providing young people with the skills and facilities needed to support their actions’; and (c) ‘creating a structure by which children and young people in care can participate in an ongoing capacity’ ( 1997 , p. 57–58). These processes formed the basis for CREATE’s current ethos: Connect to Empower to Change.

In March 1999 AAYPIC networks met in Brisbane to form one combined non-profit organisation and call it CREATE – not an acronym but an action word – meaning to ‘create opportunities with and for children and young people in care.’

Read this article by CREATE’s Executive Director of Research, Joseph McDowall to learn more about CREATE and our history.