Get the latest on CREATE news, information and events
This iframe contains the logic required to handle Ajax powered Gravity Forms.

Advocacy and Communications Officer Peter Melrose is visiting the UK and Ireland as part of CREATE’s overseas exchange program to visit different advocacy organisations similar to CREATE. Peter will be sharing findings from his journey via regular updates on CREATE’s blog.

“Don’t be pushed by your problems. Be led by your dreams.”

This quotation  is written on a wall in an amazing supported accommodation home in Derry, a city in Northern Ireland. It was created by the young people who live in this home, and has become their motto. 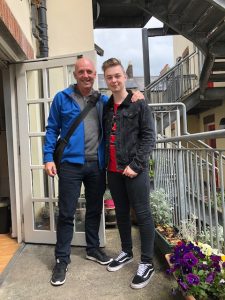 Young people aged 16 to 21 can live for up to two years in these kind of supported living arrangements while they transition from care to independence. In Northern Ireland young people can remain in care and be supported until they are 21 (25 if they are still studying).

I spoke to one of the young people who lives here, Cabhan, who is 19 years old. He said that young people leaving care must have support until they are 21 so they reach their full potential. “I can’t believe in Australia you have to fend for yourself at 18,” he said. “If I was out of care at 18 I don’t know what I would have done- I’d be homeless and without the support I need,” Cabhan said.

He believes the support he continues to receive is helping him achieve his dreams- he has recently auditioned for the reality TV show XFactor! 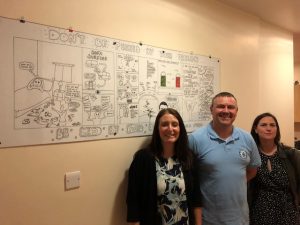 Aisling, Caoimhe and Stephen – some of the gang from VOYPIC

I later spoke to Aisling and Caoimhe (pronounced Keyvah) who work for Voice of Young People in Care (VOYPIC) organisation, a charity in Northern Ireland that does similar work as CREATE. They visit all the residential and supported accommodation homes and advocate for better opportunities for the young people who live there. They know the young people really well and, according to Stephen who runs one of the supported accommodation houses I visited, “provide the strong advocacy young people need to make sure they get the support they’re entitled to.”

I also visited a different support service call Step Down Support. In this program young people also live in their own flats but when they move out they still get support- up to 25 years of age! I spoke to Conleith, who is 19 years old and lives at the house. He said he gets support through having a case worker, and a Personal Advisor. This Personal Advisor is like a mentor who helps young people learn the skills they need to live as an independent adult. VOYPIC’s advocacy work means they also visit Conleith and make sure his case workers and advisor are best supporting Conleith achieve his goals.

Another VOYPIC Advocacy Worker, Caroline, took me to the Youth Detention Centre in Belfast. I met some amazing young people who all said that being locked up is really hard, but that having an advocate like VOYPIC makes it easier. One young person, Dermott, said “sometimes when you get in here, you don’t know what is happening. VOYPIC help us to make sure we know what is happening.” This help could be anything from making sure the young people get visits from people who care about them, to ensuring that they have a safe place to live when they are released. Caroline told me that case workers are often too busy to make sure things gets done for young people, and this is where VOYPIC and their advocacy support work come in. 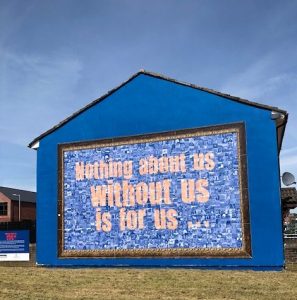 Nothing about us, without us, is for us!

Later I went to the lower Shankill area in Belfast. It’s a bit of a tough place that has seen its share of trouble and violence in the past, but it’s starting to change. There I saw this image painted on the side of a house:

This means that change cannot occur without the inclusion of young people, making sure their voices are heard in everything. This is what CREATE strives to do, and we will work harder every day to achieve this.